Parts of El Paso, Texas, and nearby Fort Bliss were placed on lockdown today when news broke of an active shooter late this afternoon. The El Paso Police Department was dispatched to join Military Police units in controlling the scene at a VA Clinic that is adjacent to the post hospital, William Beaumont Army Medical Center.

Later reports from Major General Stephen M. Twitty indicated that the incident had left two dead – the shooter, who was believed to have committed suicide, and a doctor who was working at the clinic.

Local schools were briefly placed on lockdown, but released as it became apparent that the situation no longer involved an active shooter.

Much like the scene of the 2009 Fort Hood shooting, both WBAMC and the adjacent VA clinic are gun free zones. But that didn't stop the anti-gun crowd from diving in immediately to capitalize on the tragedy: 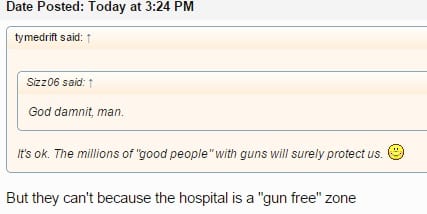