Skip to content
(By guest Lorraine Yuriar, @thekytikat on twitter)
Senator Ben Cardin (D-MD) held a round table event in Largo, Maryland, today called, “Ending Gun Violence in America: Healing our Communities.” I had no idea this event was happening in my area so I was not there. Based on the Senator’s Twitter feed, it was really an opportunity for him to push the Democrats newly-released and highly-flawed “Gun Violence Prevention Principles.”
It seems an oddly timed coincidence that Cardin’s event preaching the evils of gun shows, and perpetuating the mythical “loophole”, was held the day before the Gun Show returns to PG County’s Showplace Arena for the first time since 2013. Considering the County Executive has made it clear that he does not like guns shows at all, and all the outrageous restrictions placed on this year’s show (No live ammo is allowed on the premises at all, among other restrictions and fees), this tweet from today’s event caught my attention:

I just couldn’t believe it! My hometown police chief advocating for dealers to be held responsible for buyer’s actions? It just seemed a bit out there. So I wrote to Chief Gonnella. Here’s his response: 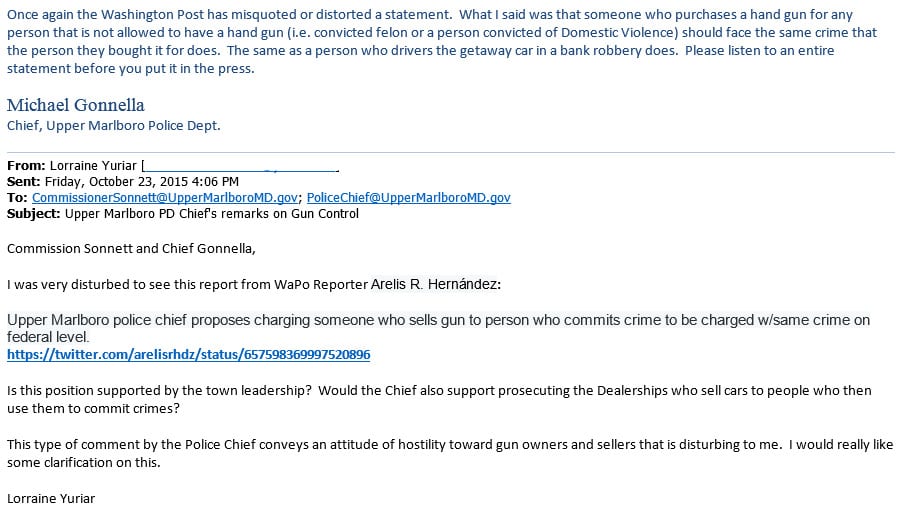 Notice, the Chief is referring to people who purchase for someone who cannot legally purchase. That is the definition of a straw purchaser, not a “seller” as Ms. Hernandez had tweeted. I quickly tweeted the screen-capped email to my followers, so that everyone who was as floored by the suggestion Ms. Hernandez had tweeted would get to see the other side of the story.

But this story does not end there. After seeing the email exchange, Ms. Hernandez asked me how what she had tweeted was different from what the Chief had written in his email. That’s how I found myself discussing the difference between a “seller” and a “straw purchaser” with a WaPo reporter while making dinner for my family.

Eventually, after dodging my requests for Chief Gonnella’s full quote as she had written it in her notebook, Ms. Hernandez admitted that she wasn’t as clear as she should have been with her initial tweet, and blamed Twitter’s 140 character limit for the misunderstanding.

She also seems to be saying that since the quote was not included in the story on the event, it wasn’t a big deal. However, what Ms. Hernandez did not know, was that her tweet had already been shared with at least one local political discussion group, and there were now people on both that group and twitter who were absolutely shocked at what the original tweet claimed Chief Gonnella had said. By contacting the Chief, I was able to set the record straight in both locations, and hopefully prevent a man from being smeared with a false representation of his opinion.

Hopefully, after this misunderstanding, Ms. Hernandez has learned a little bit about gun laws, and the power of words.