A lawsuit was filed today against Planet Fitness by Yvette Cormier, the woman whose membership was terminated by the gym after she raised concerns about a man in the women's locker room.

Lansing, Michigan – A lawsuit was filed this morning in the Midland County Circuit Court in Midland, Michigan, by Yvette Cormier against Planet Fitness. Ms. Cormier was wrongfully denied the benefits of her contract with Planet Fitness and wrongfully denied the use of the public accommodations at Defendant’s gym because she objected to Defendant’s unknown policy. The policy allows men who self-identify as women to use the women’s facilities, including the women’s locker room and showers.

The Counts in the complaint include the following:

Mrs. Cormier has filed this lawsuit to protect Michigan women and children and to hold Planet Fitness accountable for its irresponsible policy and actions. This case further illustrates the potential harm caused by adding the proposed new categories of sexual orientation/gender identity to the Elliott-Larsen Civil Rights Act.

If you would like more information about this case, including the full complaint, please visit: 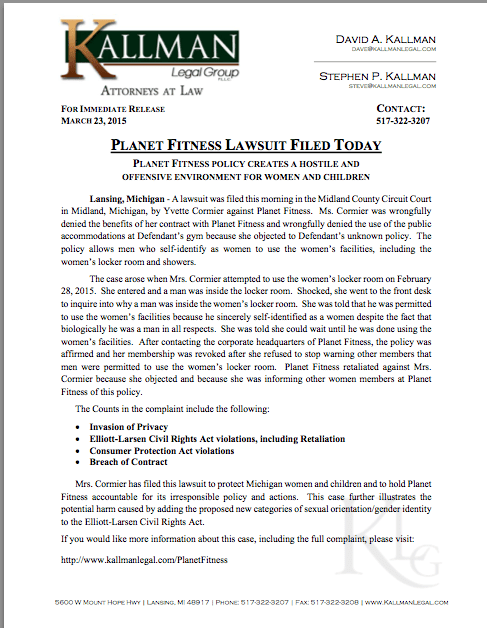 In the complaint, Cormier alleges that Planet Fitness has created a hostile environment to women and children because they will be forced to share locker rooms with men. I can't say that I blame her. It's the equivalent of “slut-shaming” where we shame a woman for being concerned about sharing dressing areas with the opposite sex. Planet Fitness has made it clear that the minimum requirement to claim use of the women's (or men's) locker room is to simply state that you identify as that sex. Women are told to be aware of their surroundings, if we see something, say something, and now we're to be shamed for being concerned about our security? Women should never have to apologize for that.