Missouri State Senator Maria Chappelle-Nadal created controversy this week when she posted a “bounty” on the identity of her Facebook critics. 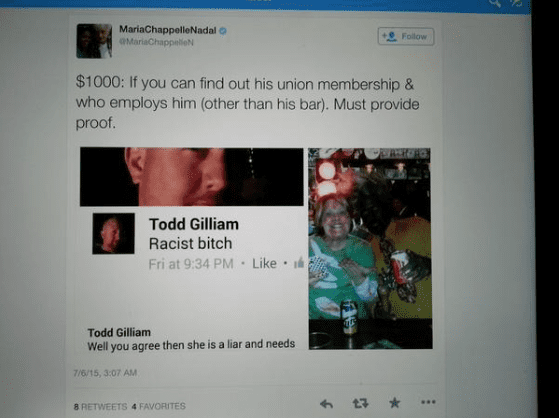 The critics were on a pro-union Facebook page and the criticisms were expletive-laden—similar to what I experienced living in St. Louis when I criticized SEIU behavior. Senator Chappelle-Nadal spoke with St. Louis Fox affiliate KTVI:

Senator Maria Chappelle-Nadal a University City democrat says she was alerted to the comments Friday night found on a public page called Pro-Union St. Louis. She says the comments centered around her stand on the school transfer bill.

Chappelle-Nadal says some of the posts included racially charged comments and vulgarities aimed at her.

‘I wanted people to know who these individuals are,’ she said.

The comments, she says, were removed from the Pro-Union Facebook page, but not before she was able to trace back the identities of those making the nasty posts.

She says she went to the public versions of their Facebook pages and copied photos of them and posted them on her Twitter feed under the headline, ‘racist union members.’

Some of the photos also showed family members, including children.

Several Twitter users have been highly critical of that tactic, but the senator defends her actions.

‘It`s a free medium. It is called the First Amendment. If he wants to make his Facebook page a private page that is certainly his right,’ she said adding, ‘When you start a war, everything is fair.’

Vulgar, racially-charged, and sexist comments are par for the course and have been, especially in left-leaning St. Louis, particularly on labor issues. After the threats and vulgar remarks I received from union members over the Gladney incident, I don't feel for the union members in this case. Finally someone, who happens to be in government, is challenging their bully tactics, albeit distastefully including their public family photos, which she shouldn't have posted. But isn't that the problem? Someone in government is posting a bounty for information on private citizens over dissent, no matter how vulgar. Welcome to conservative problems for the past several years, and we never approached the realm of such malicious rhetoric.