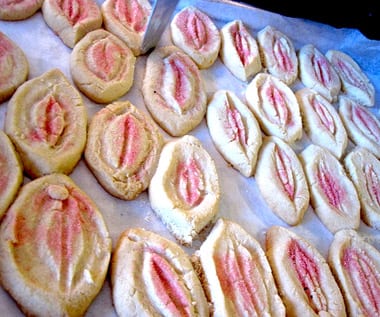 In the past few years, there have been many stories involving schools, parents, and home-cooked items of many varieties. Usually they involve a well-meaning parent whose baking efforts are refused by the school due to student allergies or a failure to comply with the dietary restrictions set by First Lady Michelle Obama, former NY City Mayor Michael Bloomberg, or an equally invasive school district.

So when my husband told me that there was an issue at a school involving homemade cookies, I thought we were headed down that road. I thought maybe this woman's cookies were refused because, being homemade, there was no way to properly monitor their nutritional value. Maybe she was informed that the proper threshold of vegetable content had not been met. Or that her students were all gluten free, and she should be ashamed of herself for trying to poison them.

But it was none of those things.

No, the woman in question made cookies that were all decorated to look like vaginas. And she brought them to her daughter's second grade class. The teacher, who seems to be the only reasonable human being in the story, refused the adult-themed baked goods on moral grounds. And because she has good taste.

In the woman's defense, she claimed that she believed it important to empower young women. And vagina cookies teach them that “all are different and all are beautiful. Apparently, women who eat uniformly shaped cookies are oppressed. Or something.

Now, you'd think that after a teacher told you that decorating cookies like vaginas showed questionable judgment, you would be embarrassed enough to call it a wash and move on. But no…

The email she fired off upon her arrival home can only be described as “bat crap crazy.” She accuses the teacher of taking teaching job because that's exactly what the patriarchy wants her to do, and finishes with the fervent wish that the teacher finds a man who will beat her daily.

But the real question is this: where were the feminists? Why weren't they all over this? Where is the outrage? After all, this woman is clearly oppressed if she believes that such a domesticated action (baking cookies, for Heaven's sake!) is the best way to empower women. Or is baking only oppressive if the cookies are round? She should have just saved time and bought the second graders condoms and S&M picture book.