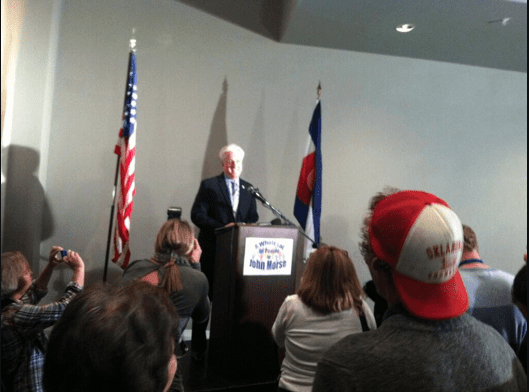 Colorado Democrats need a new senate leader. History was made tonight in Colorado as Democrat Senate Majority Leader John Morse was recalled for abridging Coloradans’s Second Amendment civil liberties. The tally is currently 52%-48%. According to Kelly Maher of Revealing Politics, Morse supporters need to “beat us two to one in remaining ballots.” Impossible.

It’s the first wave of legislative battles planned by citizens angry at state lawmakers who denied them a vote on their Second Amendment rights. As it stands now State Senator Angela Giron is narrowly ahead of her recall.

Morse conceded around 11:30 eastern time. Republican Bernie Herpin was elected to replace him.

I’ve said this repeatedly: Colorado is ground zero for our gun rights. It is the litmus test for the country.

“Here’s the bottom line,” said Kurt Bardella, president and CEO of Endeavor Strategic Communications, which is consulting with the groups seeking to oust Morse and Giron. “What happens in one week will have significant implications for the overall debate on gun-control. … Lawmakers at every level of government see Colorado as a bellwether as to whether they can risk pursuing a more aggressive gun-control agenda.”

Maybe Morse can get a job with Michael Bloomberg’s anti-gun group. Colorado seems to be shifting from blue to purple.

Will develop with Giron results.

*UPDATE 3: Giron is RECALLED with over 60% in favor. Amazing what average, everyday Americans can do, in this case a plumber (Victor Head, Pueblo Freedom and Rights) from Pueblo. Pueblo deputy police chief George Rivera was elected to replace her. FLASHBACK: Giron said the recall was “racist.” Is it still?

ADDED: Meet the faces behind Pueblo Freedom and Rights, who led the recall of Giron. That’s Head on my right:

I met these guys, Free Colorado, Kelly Maher, and many other amazing grassroots boots-on-the-ground when last out in the state. Congratulations to a job wonderfully done. These folks did a remarkable job defending civil liberties in their state. Now let’s take this trend national.