Police have “neutralized” a shooting suspect at Umpqua Community College in Roseberg, Oregon, and have confirmed that the individual is deceased and was a 20 year-old male. Disputed is the number of fatalities reported as between 10-15 with 20 wounded. My prayers are with the students, faculty, and families of UCC. While authorities assess the scene the White House has called for stronger gun control laws.

“The issue of sensible steps that can be taken to protect our communities from gun violence continues to be a top priority of this administration,” press secretary Josh Earnest told reporters. […]

Earnest said the “vast majority of Americans” support stricter gun laws, including closing the so-called gun-show loophole. But he said Obama is “realistic” about the dim prospects of congressional action on gun control.

“The president has been quite candid about how this is and has been a source of frustration for him,” he said.

I'm not sure what else could have been done in line with the White House's wishes. UCC is a gun-free zone. Yes [Updated]:

Under state law, people in Oregon could carry concealed firearms on college campuses like the one where a gunman killed several people and wounded several others on Thursday. However, Umpqua Community College has been established as a gun-free zone thanks to a loophole in state law that has made every third-level institution in the state almost entirely gun-free. Here’s how that works.

Currently, only three states—Idaho, Utah and Colorado—allow guns on campuses regardless of school policy. Oregon’s guns-on-campus law is a bit more complicated.

Under state law, “campus carry” is permitted, but each university can set its own policy on whether or not they want to allow firearms. In 2012, after the state legislature failed to pass a bill that would have banned guns on campuses, Oregon’s State Board of Education, which oversees many of the state’s public universities, unanimously approved a policy that bans guns from its campuses, and other institutions followed suit. Additionally, the policy states that anyone who does business with any of the state universities—which includes “students, employees, contractors, people buying tickets to university events or people renting university property,” according to a 2012 article posted on OregonLive.com—must agree to not bring weapons on campus. Anyone who violates this policy cannot be criminally prosecuted, but can face punishment by the university. Students and faculty could face disciplinary action from the university, while contractors risk a breach of contract lawsuit.

The State Board tried to ban guns on campus entirely, but were denied by Oregon’s Court of Appeals. The current policy of the State Board of Education states that people with concealed carry permits are allowed to bring their firearms on campuses, but are not into university buildings, which means a person can roam a campus with a concealed weapon, but if they want to go indoors, they must have somewhere (like the trunk of their car) to store their weapon. Umpqua Community College is not governed by the State Board of Education, but has a similar policy in place.

“Possession, use, or threatened use of firearms (including but not limited to BB guns, air guns, water pistols, and paint guns) ammunition, explosives, dangerous chemicals, or any other objects as weapons on college property, except as expressly authorized by law or college regulations, is prohibited,” according to the college’s code of conduct. 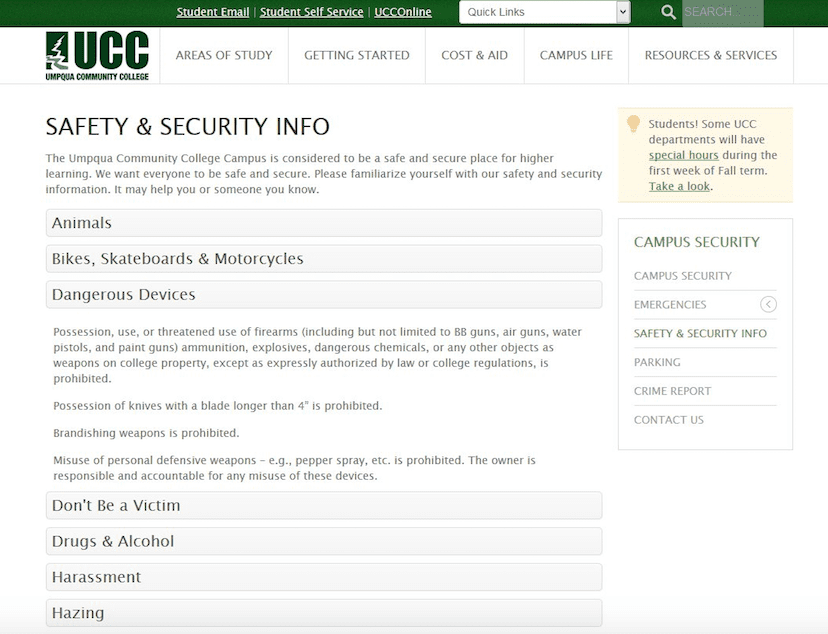 Roseberg City Council member Victoria Hawks told Neil Cavuto that the campus does not screen for weapons and had an unarmed security officer:

The former president of an Oregon community college where a gunman opened fire, killing at least seven people, says the school has only one security officer on duty at a time, and that person isn't armed.

Joe Olson retired in June from his position as president of Umpqua (UMP'-kwah) Community College in Roseburg.

Additionally, Oregon has the very gun laws for which Obama and anti-gun advocates lobby, incredibly restrictive laws. bold my emphasis:

Gov. Kate Brown signed Senate Bill 941 into law on May 11 after an intense legislative battle that pitted gun-rights activists against groups seeking to stem gun violence.

The measure requires criminal and mental health checks for private gun transfers. The federal government has long required these checks for sales by licensed gun dealers. The state police conducted about 240,000 checks last year and denied about 1 percent of the sales because the buyer is legally prohibited from possessing a firearm.

When the bill takes effect, Oregon will become the 12th state to require universal background checks for both handguns and long guns.

We also don't know anything beyond the perpetrator at this time beyond the age, 20 years-old, and that the individual is deceased. We don't know the type of firearm used, important when discussing laws (I've heard one pundit already identify the weapon used as an “automatic”). It isn't confirmed if the individual posted a threat prior online. A witness said that the perpetrator “asked about religion.”