A few days ago while trying to cull news from my Twitter feeds, Chuck Johnson was fighting with everyone under the sun and filling up my timeline. Because he seemed petty, I opted to unfollow rather than mute him. Within thirty minutes he had a public meltdown resulting in a hit piece comprised of failed hit pieces from progressives before him. He responded with a poorly-written, error-riddled, libelous piece as his traffic (via Alexa) has taken a dive this month. So much for our intrepid, “conservative” journalist. So let's address:

1. A large group of us left the St. Louis Tea Party leaving only three original members because the group was being used as a virtual shadow assist for Missouri GOP Chairman Ed Martin—the same MO GOP who won't touch RTW and numerous other conservative issues. Those who left with me include Ginni Kruta, Jim Kruta, Stacy Washington, Jimi Pirtle, Van Harvey, Jim Hoft, and others. It wasn't a secret. My co-founder later texted “let's get the band back together.” I declined. In his haste to provide gossip content, Johnson failed to do his due diligence on people and a situation he knew nothing about until spite and pettiness provoked him to do nominal digging for clicks to his questionably ethical site.

As for Ann Wagner, I never lived in her solid red district, thus couldn't vote for her, and neither did Ed Martin. That Martin didn't live in the district is more important than my never living there; Martin was running for the district's congressional seat, I was not.

As for his bombshell that my husband co-owned a business that attempted to minimize taxes and maximize cash flow from revenue? My husband and two others created this company. They rehabbed a historic building which in turn housed four additional businesses not including their own. It added revenue to the city and also created a new, safe parking lot for our neighborhood's businesses. When you have multiple partners, you don't always get your way in determining the best course of action. This extends to TIF. A tax credit is a credit on future potential taxes that the property could generate. You can sell the credits to the bank or not, or a business who need help cutting down their high corporate taxes. The money is taken at a loss on a break in order to do things like rehab buildings—and in St. Louis, many buildings are designated as historic buildings thus, it's a trap: you're damned if you do or don't and you still pay tax on it. Unfortunately, we aren't frillionaires. There are arguments for and against it. People who like to keep more of their own money to revitalize an area as opposed to sending it to the government for free phones may argue for it. Others may argue against because certain credits can promote cronyism. Regardless, had he operated solo, it would have developed differently. He sold his interest to his partners some time ago and hasn't had anything to do with it since. And no, I wasn't paid, as Johnson libelously claimed. So again, Chuck should learn more about a city and the regulations driving out business before again, writing hastily out of spite.

3. Regarding Holly Fisher, I'm pretty busy with my own family to get involved in the issues of a private individual. I never remarked on it publicly myself. Posting something something on Facebook or Twitter doesn't elevate someone to politician status. That said, if people are bent on making other people's issue their business, I'll refer them to John 8. Go argue with Jesus about it, because you will find no interest from me. I'm not sure what this even has to do with this anyway, but he insists on bringing it up.

4. I'm nationally syndicated with Radio America in over 60 markets. Johnson couldn't even get that correct.

5. Concerning Richard Mourdock, he's a friend. I questioned his interaction with a videographer. It's no secret my vocal opposition to Dick Lugar. Check the archives and you'll be doing something Johnson did not.

6. “Loesch came to prominence through her work with the Riverfront Tea Party.” This group doesn't exist. I started the St. Louis Tea Party on my radio show in 2008. The head of the Missouri GOP did not found the tea party in 2010, as Johnson claims. (Added this egregious error after publishing this post.)

7. “Two years later Loesch all but endorsed Martin’s 2012 GOP Establishment opponent, Ann Wagner. Loesch began showing up at major GOP events at the Wagner table. Here‘s a great website all about it. Here‘s a photo of her with Governor Christie and Wagner at Wagner’s table. There are some serious questions about whether this is even legal under Payola laws.”—Actually, I never endorsed Wagner. I attended a Republican event with STL Tea Party members. Johnson, like the progressive from who he grifted his content, also doesn't know what Payola is. He actually cited a Media Matters writer for his content here. This guy is a conservative? (Added after this post published.)

8. As for Andrew, I'm not sure what an observation about my friend has to do with Chuck Johnson, unless Johnson has changed his name. I am not quite sure why this is characterized as a “war over legacy” because there will never be another Andrew. Charles has spent days claiming the mantle on Twitter. I don't care. It's sad that he's tried to make it about such a thing. Also: I am still friends with Andrew's family. My dislike is for Steve Bannon, which is separate from this. But beyond this, Johnson has done something which may carry more legal implications than can be stated here and quite literally made up his entire claim here. All of this is for the right people to decide, though, and I'm sure folks will see how that develops.

Chuck refused to publish the emails he claimed he had, which means this is total conjecture on his part. 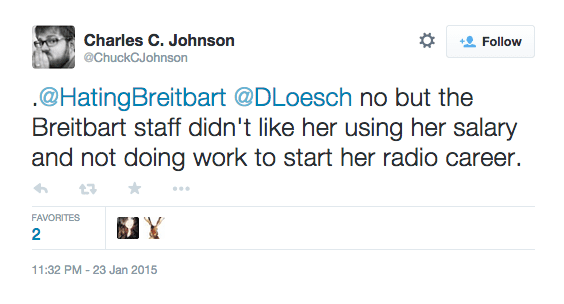 Here is a sampling of Johnson's reporting: 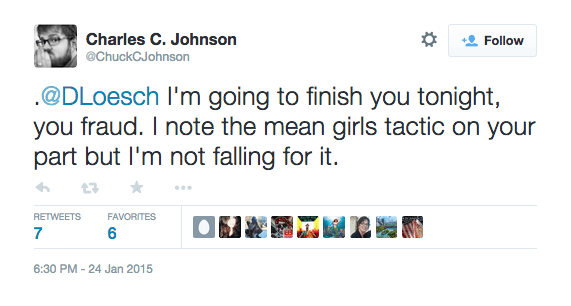 Here's info from a source who claims that Johnson was trying to find a way to pry into my marriage: 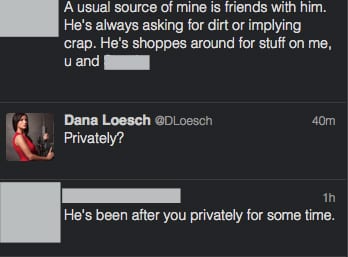 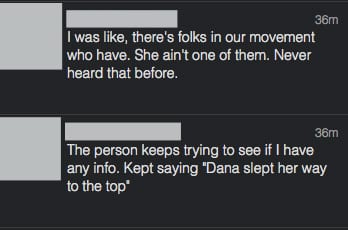 I'm not quite sure what Johnson's problem is, but this behavior is ridiculous, almost as much as his prediliction for writing about women.

*UPDATE: I had this piece written before Johnson even published his. He isn't the brightest bulb in the box, so I knew what he'd go after: progressives's past debunked hit pieces on me. I don't even think he bothered to write them in his own words, just copied and pasted. Johnson's site: where a wannabe Andrew Breitbart fakes conservativism and rewrites progressive pieces. Applause!